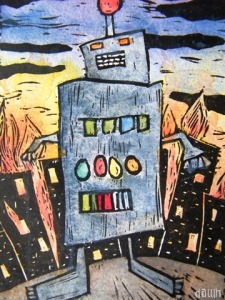 I’ve been juggling sick kids and contractors this week.  Strep throat, barfiness and finishing a shower to be specific.  Which means I’ve been struggling to keep an even keel.  Add to this a bunch of deadlines that come with end-of-school and summer art shows – and yeah, things around here are a bit hectic.

But aside from all that I’ve got a little commission to make a couple of felt robots to go with my Parker J. Robot print.  This is one of my favorite prints as the artwork was done by my son.  He is so proud of it (as he should be) and I’ve sold quite a few copies.  I hand color it with watercolors and the whole thing just pops.

So I’ve been thinking about my designs for the robots and today I cut out the first one.  This is a new design and matches the robot in the print.

I should probably save my “pattern” such as it is, and maybe even take some pictures as I go – I would like to try selling patterns for them in my etsy shop.  But that would add another thing to my “to-do” list so, nah.  Another time.

The second robot will be more Bender-like, as I’ve done before.  And I’ve a design in mind for a third, after watching an episode of Ben 10 with my poor sick little daughter today.  And, since I”m on a robot kick, here is a sneak peak at a print I’ve been working on.  It may or may not be one of a series of prints called “homilies”.

UPDATE:  omg!omg!omg!  I just found out that I’ve been accepted into the Plush You! show this fall at Schmancy in Seattle!  omg!