Time flies when you are going 200 mph.  Life totally overwhelmed me the past few weeks with deadlines, volunteering and just too much going on at once.  It also doesn’t help that it seems like summer will never arrive.  It has been cool, rainy with only the occasional sunny day.

But today the light at the end of the tunnel appeared with the end of the school year.  The kids are finally done, the last four days having d-r-a-g-g-e-d out mercilessly.  I checked my garden this afternoon and it is plodding along… 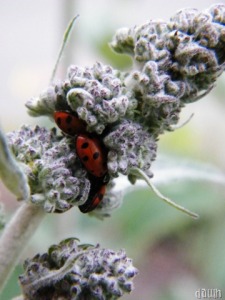 Rozii released 500 ladybugs into the garden.  I think they are busy trying to keep warm.  Poor little things.  They like the butterfly bush and they are nestling happily into the rosebushes.

The snails have found my lettuce. I didn’t really think that the raised beds would keep them out.  My lettuce and swiss chard are delicious. 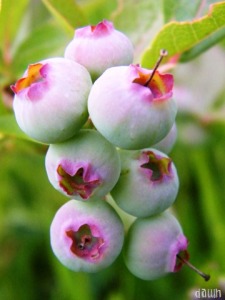 We have five blueberry bushes now and four of them are covered in berries.  When I say covered, I don’t mean bushels but if we were to save all of them we might get a pie.  I think I’ll just let the kids graze on them.  Maybe we’ll have a taste test of the different varieties.

My bush sweet peas are blooming! These are the seeds from Angela’s baby shower!