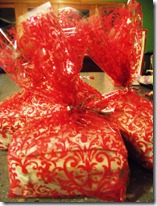 I like to leave my holiday baking to the last minute.  It isn’t a necessity, is nice to do but I want to make sure that we have time for it and I’m not stressed out by something that really should just be fun.

I started my baking earlier in December with my annual fruitcake.  I used the same recipe as last year, the Dowager Duchess Fruitcake from Martha.  This year though I cut amount of ingredients in half and used the little loaf pans.  I still ended up with 8 loaves.  I was supposed to start it some weeks ago and let it soak up sherry the entire time.  This isn’t than as boozy as it should be.  I think it means that it should be served with booze.  I’m sure Martha would agree.

Derick loves this fruitcake and eats it as a snack with peanut butter.  mmmm-kay. I like having it on hand to give to friends as a little gift because I think it is hilarious.

I also did some baking for Derick that he received as gifts – he can tuck these away downstairs where no one can find them.

I started with a white chocolate bark – another recipe from Martha.  To the one pound of melted Gheredelli (!) white chocolate I added chopped, salted pistachios, dried cranberries and toasted coconut.  The best part about this particular gift is that I don’t like white chocolate so he really will have this all to himself.  I’m assuming it’s delicious because it looks gorgeous.

Next I started out to make rum balls.  Derick loves rum and I thought it would be fun to use coconut rum because that is his favorite.  Of course I (foolishly) assumed he would have this on hand but sadly, no.  The closest thing I could find was creme de banana, whatever that is.  It smelled good though.

So I used my friend Evelyn’s recipe for Bourbon Balls, substituting the creme de banana for the bourbon.  I also decided to roll the balls in toasted coconut rather than in the walnuts and powdered sugar recommended in the recipe.  They are soooo good, the banana, the nuts, the coconut all go so well together.  The end result, as you can see, resulted in, well, what I’ve aptly named “monkey balls”.

The kids thought this was hilarious and could not wait to tell Derick but of course, it had to be yet another secret to keep which pretty much put them at the point of implosion.

The next thing on the list of baking was also on the tropical end of the spectrum.  This is a square, the kind that your grandmother probably made before pineapple was readily available.  I love this sort of thing and think that the holidays are meant for it (see note above regarding the giving of fruitcakes.) 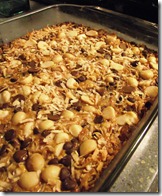 This recipe, which also makes a lot, is from the lid of the container that candied pineapple comes in.  Yes, from the same ilk and grocery aisle as the candied fruit used in fruitcake.  The square also contains such healthy ingredients as sweetened condensed milk, more coconut, macadamia nuts and chocolate chips.

It really is good and holds together well.  This is a nice square to also give to friends to compensate for the fruitcake. 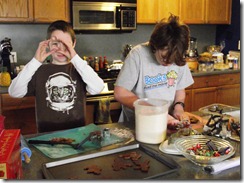 Finally, last but not least, the kids made ninja bread men.  Yes, ninjas. 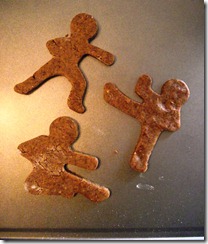 We got the cutters at one of my favorite online stores, Perpetual Kid (home of the inflatable turkey that we pull out at Thanksgiving and put on our big serving platter).  They also made ninja stars, owls, trees, bunnies and various other gingerbread items.  A good time was had by all.

Hope you are enjoying the holidays!