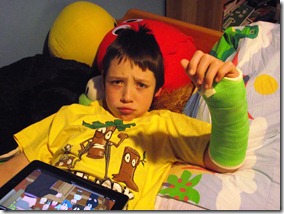 There are days when I’m pretty sure that I’m a bad parent.  My son was goofing around with his buddies before his basketball game on Saturday. Derick and I were already in the bleachers waiting for the game to start. All of a sudden one of Parker’s buddies and a parent both came running in, “Parker fell!”.  By the time we got to the hallway his coach was carrying him in and lying him down on a table.  He grabbed ice and bandages and we took over.  Parker was mostly scraped up (knees and hands) but his wrist hurt too.  Once he calmed down we got him home, more ice, and a tensor bandage for his wrist.

Sunday we took the bandage off and his wrist looked, well, wonky to say the least.

This morning I took him to the doctor. She took one look at it and said, “We do our casting at Children’s Hospital, is that okay?”  I said yes, then she sent us for x-rays and sure enough. His arm has a fracture through both bones, near his wrist, and one of his wrist bones is also fractured.  Parker was so excited.  A cast!  For all his friends to see and to sign!  The best thing that ever happened to him.  Off we went to Seattle Children’s Hospital (omg that place is beautiful).  We were seen right away and within the hour we were on our way home with an appointment to go back in 5 weeks.

The picture is not how he really feels.  He’s in no pain and can’t wait for school tomorrow.