I just love Cathy of California.  We are pretty close in age and grew up with the same types of magazines and crafts as I did and in a very crafty home, as I did.  Her blog features crafts, artists, art, home décor and so on of the 60’s and 70’s.  She often references McCalls Needlework magazines of which I personally own a bunch (I hope I haven’t inadvertently bid against her on eBay for any of these).  She is also personally responsible for a large chunk of my craft book collection – in fact I think most of the vintage books are her fault.  She would show all these amazing photographs from books and I’d head on over to Powell’s or Amazon… sigh.  I couldn’t resist.  And I reference them all the time, not so much to make the craft or sew an item, but the esthetic of them influences my work so much. 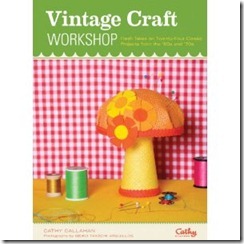 I was so excited when I heard that she was writing a book. I assumed it was a take on crafting of the 60’s and 70’s.  I had no idea that it would be a homage to the women of that era who brought crafting to the main stream.  Women like Aleene Jackson (who doesn’t have a bottle or three of Aleene’s Tacky Glue in their stash?).  Or Jean Ray Laury, whose applique has been a huge influence on my printmaking.

Each contributor was given a photograph of an iconic craft from the era and they put their spin on it and have given instructions for making it.  What is funny (or sad) is that I have the originals of many of the craft books that she references.  The projects use my favorite crafting materials, felt, burlap, mod podge.  The projects reflect the trends of the era, macrame, folded magazines (I remember these as Brownie projects) and covering buckets to make waste baskets (we used KFC buckets, macaroni and gold spray paint).  You may or may not find yourself making these projects but the book itself is a wealth of information.  Personally, I’m going to be making the tissue paper painting tray.

And finally, one of the things that tickles me the most is the quote on the front of the book, “One of the best craft books I’ve seen. This book makes me jealous.” – Amy Sedaris.  Amy, I agree!