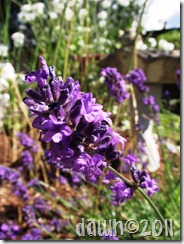 While I was at the shore with the teenagers my husband and son were camping on the Olympic peninsula.  The two of them have so much fun together and go on ridiculous adventures.  Amongst other things they went to the Sequim Lavender Festival.  Really?  Afterwards, while at a rock shop the clerk noticed Derick’s button and said, “You don’t look like a Lavender Festival guy.”  Derick just said, “Thanks.”  Bless their hearts though, they brought me back two kinds of lavender.  Derick remarked on how different each kind of lavender could smell.

The things you learn and lavender, and your husband.

While at the shore we also had a discussion about lavender with one of the shop owners who had a bowl full of buds and a garden full of it in front of the shop.  She gave us scissors and let us all cut some.  Rozii and I decided that we want to try making our own lavender wands.  I’m not sure my little patch has quite enough, but we’ll see.