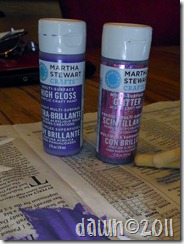 When I heard that Martha Stewart had come out with a new line of craft paints and craft paint accessories I have to admit I was pretty excited.  I use craft paints for lots of projects.  The idea that you could use the same paint for multiple surfaces is great.  I didn’t have a “need” for anything until I decided to repaint some inexpensive frames for my current 2D 3D pieces.  So I from the Martha line I bought some gesso as a base coat then a combination of high gloss and glitter paints (it’s all about the bling). 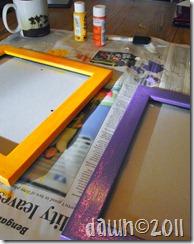 Starting with the I painted the frame with gesso then applied my first layer of gloss.  Then a second layer. Then a third and finally, a layer of glitter.  To be honest, needing three layers of paint to cover white seemed excessive.  I was waiting at least an hour, if not longer in between coats as per the instructions.  For one of the frames I used Folkart brand paint then the Martha glitter, same results.

The glitter paint was better than others I’ve used, the glitter in it being very fine and the more coats the more glitter so it was nice to use.

On the first frame I was still unhappy as the texture kept getting rougher so I sanded the paint and applied another layer of gloss and another layer of glitter.  It wasn’t really perfect but I thought it was close enough to put on a final layer of Martha’s high gloss enamel spray.  um.  yuck. 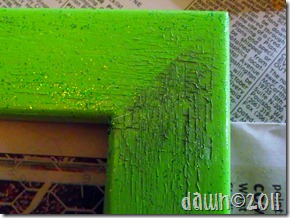 You would think that I had used a “crackle finish” spray.  It crackled the paint and brought up the black frame, which is at this point three or four coats of paints away from the enamel spray.  I’m going to have to re-sand and re-paint the frame.

I have Krylon brand spray in the garage which I’ve used before so I’ll use that going forward and return the Martha spray to the store.  It isn’t that these products are any more expensive than other craft products in the same aisle. The paints are $2 a bottle, comparable.  The gesso was $5 for a large bottle.  The spray was about $6.

I’m curious to know if anyone else has any experience with this line of products?