This week I am reviewing some of the books that I’ve read over the summer, today it is Star Trek Cross Stitch, a book my kids found for me at Powell’s! 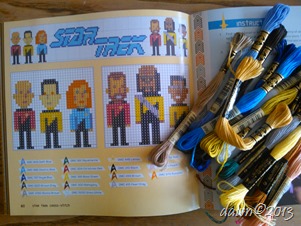 At the beginning of the summer my daughter declared that she could not return to school in the fall until she had watched all of Star Trek: The Next Generation.  The reason being that all her friends referenced it all the time and she was tired of not getting it and being (gently) teased.  Now I know some of you have the word “bullying” in mind and had this been at my daughter’s middle school I’d be on the phone to the principal.  However, this is the tiny little school that my kids go to now where nerds rule, everyone plays Dungeons & Dragons and heated arguments are usually centered around historical references.

Anyway, I do have a point and that being, our family became engrossed in TNG for the entire summer.  My daughter read Star Trek novels, we watched all of TNG (and two seasons of DS9) and I started following not only Wesley Crusher, but Dr. Crusher, Riker, Data and Worf on Twitter.  It’s been a blast.

So my kids picked out this book for me and I am going to tackle the DS9 crew for the wall in our family room.  Since we are now watching Voyager every evening (one or two episodes) and I usually don’t just watch TV I figure I can work on this project at the same time.

oh, the book review!  Yes, this is a great book!!  Really  nice illustrations, straight forward instructions and lots of cool references not only to the various Star Trek series, but to the fandom as well.  A proper review can be found over at Mr. Xstitch this week along with a chance to win a copy of the book (how is that for a coincidence?).  Hurry, contest closes September 8th.