Over the past couple of weeks I’ve read some great books so thought I’d mention them.

I can honestly say I don’t think I’d read a biography of Shakespeare written by anyone else.  I love Bill Bryson’s books.  He is funny and smart and keeps the story moving along at a great pace.  This was such an interesting book.  He starts out by stating the things they know for absolutely sure about Shakespeare, which is about six things.  From there he goes on to explain how everything else came to be filled in based on conjecture, fantasy and historical “evidence”.  A quick read, I recommend it, along with all of Bryson’s books.

The Girl with the Dragon Tattoo by Stieg Larsson

Yes, I’m likely the last person on the planet to read this and why I took so long I have no idea.  Let’s just say I’m really glad there are two more books in this series, and a big thank you to my friend Helene who gave me this book for my trip to Washington.  It took me awhile to get into it, I found I had to concentrate to keep the names and details straight.  Once I got going I could not put it down.  The movie has been made in Sweden and they in the works to make an American version.  I really really hope that the American version is still set in Sweden though…

Water for Elephants by Sara Gruen

So last week I was sitting having coffee and pastries with my neighbors and we were talking about books and this book came up.  It turned out that of the four of us we’d either read it, were reading it or meant to read it.  We decided that was enough to form a book club so at the end of the month about eight of us are getting together to discuss this.  It’s a quick read.  I loved the setting, a depression-era circus.  Derick and I have been watching “Carnivale” which is a much darker version, a shady, depression-era carnival so imagining the setting was easy.  It’s a good book, great story. 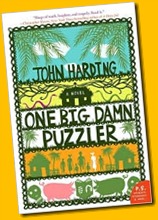 I picked this book up from the bargain table at the book store based on the cover art.  But once I read what it was about, I knew I had to read it.  Have you seen the movie about the oil company that tries to buy a little town in Scotland?  It’s called “Local Hero” and I can honestly say, it’s one of my favorite movies of all time.  Well, the outline of this book sounds much the same.  And when you read the translation of Hamlet into pidgin English (yes, more Shakespeare), well, it just gets better.  I’m just a couple of chapters in, but so far, so good.

UPDATE:  I just had to find out more about the illustration on the cover of this book.  It’s by Rob Ryan and I know you’ll recognize his work the minute you see more it, as did I.  Amazing.